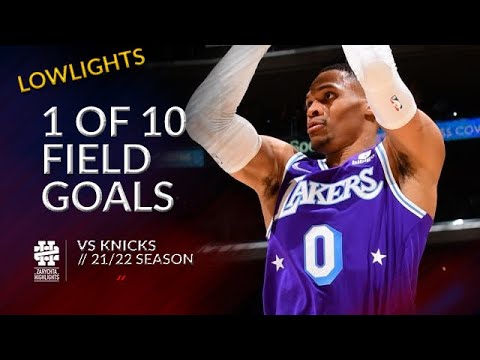 While LeBron James was on fire after five games absence due to knee injury, Russel Westbrook, the point guard, was taking the heat from hate media. He is one of the most highlighted NBA players recently due to his poor performance in games.

Last Saturday, the Los Angeles Lakers faced Knicks alongside LeBron who has ice under his veins. While everyone was cheering for James, fans were booing the former MVP when he missed shot attempts in the first half in a video on Twitter by NBA Central.

Later then, fans were clearly discouraging him from attempting a corner 3-pointer saying ‘No’ at Crypto.com Arena. Westbrook was impacted by the hatred that led him to finish the game with five points on 1 of 10 shooting with six assists and four turnovers.

After Los Angeles Laker’s game against New York Knicks which result in an intense 122-115 win, Westbrook did not seem to really care about the post-game press conference when interviewed by the House of Highlight on Youtube, February 5, 2022. He was focusing on his phone but responded to several questions that gave the response to the media.

Westbrook: ‘It’s not about me’

Westbrook was out of the final frame during the overtime when the Lakers won the game. He was benched by Coach Frank Vogel because Vogel knew that something was up with Westbrook that night. In addition to the crowd’s negative woes towards Westbrook, Vogel taped Talen Horton-Tucker, who was scoreless to that point, to play for Westbrook. Although it was a rough night for Westbrook, thankfully, his teammates, James, Anthony Davis, DeAndre Jordan, and Avery Bradley got his back.

“I think obviously Russ was having a tough night on both sides of the ball and [LeBron James] was really going,” Vogel said.

Vogel admitted that it was a tough decision. However, a decision has to be made.

“You just make tough decisions in the spirit of whatever the team needs to win a game,” said Vogel.

Westbrook did not feel that it was a bad thing to do from Vogel. Instead, he understood why Vogel did it and why it happened. While Westbrook was not thrilled about being benched, he himself admitted the differences between the last time he was benched, referring to the game he was benched against Indiana Pacers back in an earlier season, adding, “I was more upset I didn’t win the game but not about when or how he would do it.”

“It’s not about me. I don’t want to make it about me. It’s more about our team and our guys. Tonight we got a good win and now move onto the next one,” said Westbrook.

After the team’s overtime win over the Knicks on Saturday, Westbrook did not have too much intention or interest to talk about the woes with reporters after the game. He knew that some nights were just bad and he did not mind being benched as long as the team won.

“Everybody has off nights. I have some. Other people may have some. That’s part of the game. That’s basketball,” Russ explained.

“The best part of this game is that you win. “Guys competed. We won the game and that’s all that matters.”

Although the game ended in a winning hoop, Westbrook expressed his opinion when alluded to by the media.

“When I play bad, you guys ask me a s–t ton of questions,” Westbrook said. “And then when I shoot the ball well, I don’t hear too many of those questions.”

Westbrook hopes to prove all the critics wrong while he prepares for the next game against the Milwaukee Bucks on February 8 and Portland Trail Blazers on February 9.

Russell Westbrook III is an American professional basketball player for the Los Angeles Lakers of the National Basketball Association . A member of the NBA 75th Anniversary Team, (wikipedia)