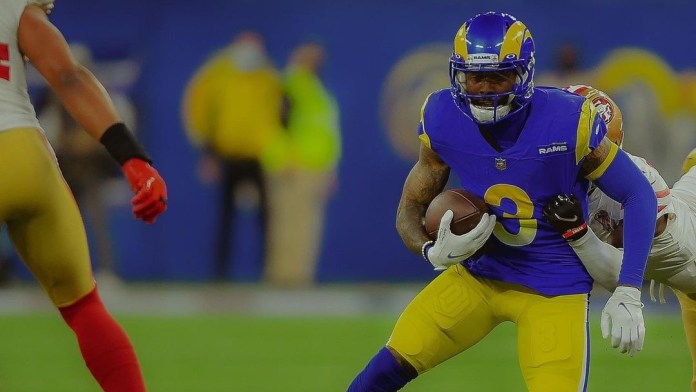 Los Angeles Rams wide receiver Odell Beckham Jr. has reportedly been in discussion with the Rams about his ongoing contract. Beckham has been rumored that he is going to stay in LA instead of trying his luck in free agency. This was further claimed by NFL Insider Ian Rapoport on Thursday about the mutual interest between OBJ and the Rams.

With this move, Beckham reaps compliments from sports fans, especially after stating that he is willing to cut on his salary cap to be with the Rams where he felt at home. Although there is no official statement yet, per Aaron Wilson of Pro Football Network, it seems likely that OBJ is set to re-sign with the Rams in a matter of a few days.

Report: Odell Beckham Jr is expected to avoid free agency and re-sign with the #Rams, per @AaronWilson_NFL

Previously, OBJ had a rough season in 2021 back with the Cleveland Browns where he had a dispute with a fellow teammate, Baker Mayfield, quarterback. The cold war ended when the Browns released OBJ from the team last November.

Many teams passed on the two-time Second-Team All-Pro, given that he has an injury of ACL history. Additionally, leading towards the alteration of becoming a free agent, he was misunderstood as a drama queen. However, that did not hinder OBJ to keep on thriving.

At that time, the 29-year-old was also working on eliminating his 2022 and 2023 contracts to become a free agent. Once he becomes a free agent, that is when he eventually made the pack with the Rams.

I asked Odell Beckham Jr. about his future beyond Sunday and if he’d sacrifice salary to stick with the Rams. The answer was a quick “yeah, of course!” with a smile.

“This place, it feels good in my heart. It feels like a home.”

Beckham to stay in LA

This offseason, the Louisiana-born player will become a free agent again after winning Super Bowl LVI with the Los Angeles Rams on Sunday night, February 13 at SoFi Stadium. Obviously, OBJ proved that he got what it takes of becoming a champion amidst the negative comments from others.

During a media interview, he admitted that he was “Very, Very, very, very. … I was very close” to choosing the New England Patriots instead of the Rams.

Thankfully, he did not choose the wrong team. In an interview beyond the Sunday night game, Nick Shook, NFL insider, asked OBJ if he would sacrifice anything like a salary cap to stick with the Rams, the Super Bowl champion quickly answered “Yeah, of course!”.

“This place, it feels good in my heart. It feels like a home,” OBJ added.

Aside from tearing the same ACL in the championship games that were injured in 2020, Rams head coach Sean McVay does not seem to have any problem taking OBJ back into the team. On the contrary, McVay wanted to convince OBJ to return back.

“We definitely want to be able to get Odell back,” McVay told NFL’s Adam Schein.

“I also know that there’s gonna be some other teams that probably want his services, but hopefully we’ll be able to convince him to come back and be a part of this thing.”

Per NFL Network’s Ian Rapoport, Beckham will be ready to hit the turf at the beginning of November. Ultimately, Rams fans hope that the team can repeat history. While OBJ is sidelined, Robert Woods will return to his role as a receiver.