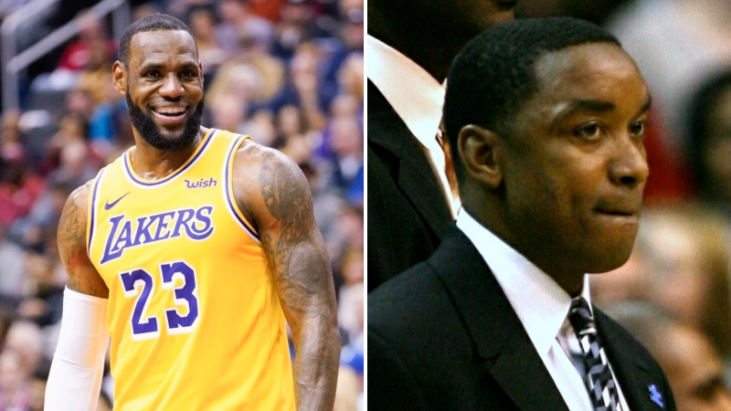 Another milestone for Los Angeles Lakers LeBron James as he became the first player in NBA history to have 30K points, 10K rebounds, and 10K assists. While the Los Angeles Lakers have been struggling, James has constantly shown an outstanding performance. His achievement gained attention from some NBA legends, including Magic Johnson, Isiah Thomas, and Eddie Johnson.

Previously against Golden State Warriors, the four-time NBA champion shot a 19-of-31 from the field, 6-of-11 from the 3-point line, and 12-of-13 from the free-throw line. In a total of 56 points that Saturday night, he became the only one of two players, with Kobe Bryant, dropping 55+ points. Obviously, everyone was impressed, including Lakers head coach Frank Vogel.

“There’s really no words for it. An incredible performance. The best to ever do it in my opinion,” Vogel said.

In the current situation, the playoffs look further for the purple and gold army, considering the Monday game against the Toronto Raptors where they lost 114-103, following another loss to the Phoenix Suns a day before. It was a bitter and sweet moment for LeBron to have something to cheer about this time.

On the other hand, Anthony Davis is expected to return according to reports and Russell Westbrook still performing inconsistently, it might be a tad bit too late for the Lakers to resurrect. However, NBA GOAT should be given his honors when achieving this “once in a lifetime” eponym.

“I get a loss of words anytime things like this happen to me,” James told ESPN.

“I automatically start thinking about my hometown of Akron and my upbringing where I come from. The dreams I had of being in this league at the highest level and to now sit alone in a statistical category in this league. I model my game after being able to score, rebound and assist. And to sit alone in a stat, I’ll say cool, but it doesn’t quite make sense to me.”

.@KingJames is the FIRST player to have:

James is averaging 29.7 points, 8.1 rebounds, and 6.3 assists per game while shooting 52.1 percent from the field and 35.8 percent outside the three-point line. While the 18-time NBA All-Star hasn’t yet received as many titles as Michael Jordan, his play this season got him one step closer to Kareem Abdul-Jabbar who scored 38,387. Meanwhile, LeBron has scored 36,824 points in the regular season.

On Monday night’s game against the Toronto Raptors, James finished with 30 points, three assists, and nine rebounds. While the Lakers have been given negative comments from fans several times, LeBron was by far the most highlighted in the news cycle. Regarding King James’ latest achievement, Earvin “Magic” Johnson, Isiah Thomas, and Eddie Johnson all shared their thoughts.

Zeke, they have no clue how difficult and unselfish it is to be in a club by yourself like this!Let this sink in people.He possibly will become the all time leading scorer and to 5 in assists. That is called game management. He could have broken Kareem’s record 3 years ago if not

Congratulations to LeBron James on becoming the only player in NBA history to record 30,000 points, 10,000 rebounds, and 10,000 assists in his career! @KingJames

Another milestone for the King‼️

The only player in NBA history to record 10K+ points, rebounds and assists … LeBron James 👏 pic.twitter.com/GOWyY5wELh

Unbelievable Basketball Player once in a lifetime @KingJames Let it be Known https://t.co/M5JUqirC5F

Isiah Lord Thomas III is an American former professional basketball player, coach and executive who is an analyst for NBA TV. A point guard, (wikipedia)