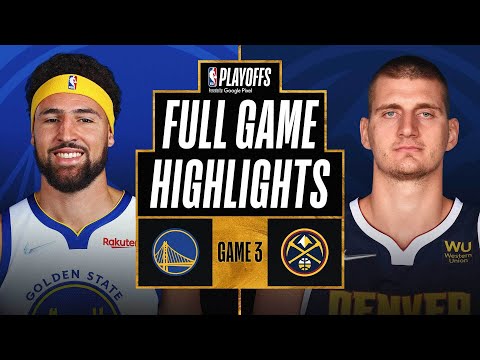 The Golden State Warriors were having a blast as they beat the Denver Nuggets in Game 3. The game took place at the Ball Arena on Thursday, with fans watching the thrilling game before them.

The Warriors took a 3-0 lead and finished the game with a score of 118-113. Stephen Curry, Jordan Poole, and Klay Thompson were on fire, dominating the game and shooting the ball in.

On the other hand, the Nuggets were struggling to hold the Warriors down. The reigning MVP, Nikola Jokic, managed to score 37 points, 18 rebounds, and 5 assists. But his play alone was not enough to bring a victory to the Nuggets because he didn’t get enough support from both ends of his side.

In Game 3, the Curry, Thompson, and Poole trio stole the show with their outstanding play. Curry, who had just returned from injury, demonstrated that he still has the hang of it. He scored 27 points, six assists, and shot 70 percent from the floor.

His impressive play even left a candid remark from Nugget’s forward, Jeff Green. He was fully aware of how good Curry is and said that Curry didn’t show any exception in his play, whether he started or came off the bench, despite the injury that he suffered. “He’s still as good as s**t,” Green said.

Jeff Green, asked if there’s a difference between Steph Curry starting vs. coming off the bench: “The m******** is still good as shit.”

Curry had the same exceptional play in the first two games too and had an average of 25 points per game. Being the valuable asset that he is, head coach Steve Kerr put Curry on a minute restriction to avoid any other injury.

Poole, on the other hand, finished with 27 points and three assists. He was having a good start by hitting a 3-pointer. Not only can he shoot precisely, but he’s also quick, as evidenced by his refusal to settle for an open 3 and instead went straight for a score. He is also the first player with an average of 25 points and an effective field goal percentage in the shot-clock era. Poole’s ability was acknowledged by the coach too, as he said that Poole “continues to play well.” In addition, he added: “This is his third straight playoff game where he’s really done a great job of knocking down shots and making plays.”

The Warriors also had Thompson, who scored six 3-pointers from the outside. He also knew the right timing to go in to attack and post the ball. Thompson is one of the biggest threats to the Suns as he’s known for his efficient play. He finished the game with 26 points. Along with Curry and Poole, the Super Splash Brothers contributed 80 points toward the overall score.

Apart from the Super Splash Brothers, Draymond Green also gave a remarkable performance as he was up against Jokic. He was making a steal from Jokic with 34.7 seconds left and was on his fifth foul.

Green was pushed to his limit by fouls, but he said that it didn’t intimidate him to stop Jokic. “You can’t play the last four minutes of the game worried about fouling out. I’m going against the Joker. I have to be willing to use all six of my fouls at some point in the game…. But I can’t start playing timid because I picked up my fifth foul,” he said.