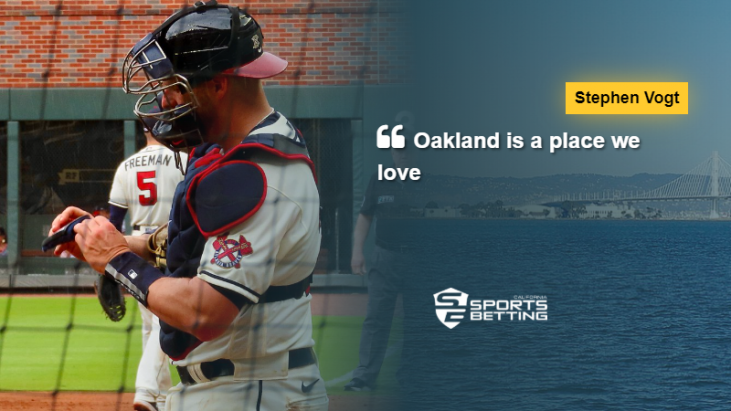 Later, the information was confirmed by the Athletic’s insider Martin Gallegos. Amid a struggling offseason, fans hope that the return could bring Vogt his previous All-Star performance like in the 2015-16 season.

The A’s and Stephen Vogt are in agreement on a major-league deal, pending a physical, The Chronicle has learned. Popular catcher reuniting with Oakland.

With a tremendous performance, it is no wonder that the California-born player became a fan favorite. His production continued, although it was declining, insignificantly different. Through 54 games in 2017, he was off with .217 in 157 at-bats. After that, the A’s placed him on waivers, making him available in the trade market where he was claimed by the Milwaukee Brewers.

“Oakland is a place we love,” Vogt said in 2017. “It’s a place we watched our family grow. We had success here as a family and as a team. We’ve developed a lot of relationships that will last.”

However, in the past two years, the two-time All-Star was struggling as his numbers sharply declined since the peak with the A’s. He finished last season with hip inflammation, unfortunately, making the injury part of what is preventing him from partaking in the Braves’ run to a World Series title.

Can confirm A’s are reuniting with Stephen Vogt on a Major League deal. Deal is pending physical.

The deal is reportedly pending a physical. Hopefully, the deal could be a hundred percent made completed while fans are waiting for an official statement soon from both parties. A return to a familiar environment might be Vogt’s way to becoming the superstar he once was.

Vogt at 37, wearing the green and gold uniform again, will be greeted by a sizable portion of the fanbase. Vogt’s addition to the team might fit well on a larger depth chart.

Recently, Oakland acquired one of the catcher’s top prospects, Shea Langeliers from the Braves in the Olson deal, giving them another promising long-term option at the position. Langeliers only played a couple of games in Triple-A. A short-term stopgap might be just what he needs.

Meanwhile, Austin Allen is still on the 40-man roster, but his defense is believed to be questionable. With the arrival of Vogt, Oakland might just have more or enough time if they want to place Allen for another assignment.

Meanwhile, skipper Mark Kotsay could also get something out of the trade. With the presence of Vogt, Kotsay could be provided with a valuable clubhouse presence and a bat-first depth option at the catcher position.

On the other hand, in an effort to cut the A’s limited budget, the teams have kicked off an organizational reboot this winter, flipping Chris Bassitt, Matt Olson, and Matt Chapman.

Until recently, the A’s and Vogt’s deal is still unknown in terms of length and price.

Matthew Kent Olson is an American professional baseball first baseman for the Atlanta Braves of Major League Baseball . He previously played for the Oakland Athletics. (wikipedia)