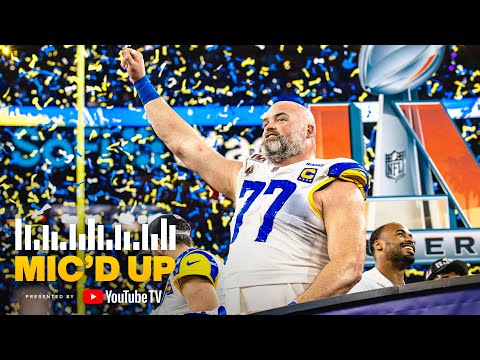 Another Super Bowl Champion retiring after Tom Brady is no other than Andrew Whitworth. A 16-year veteran, he is coming off as champion after winning with a 23-20 victory against the Cincinnati Bengals. On NFL interview Wednesday, the Los Angeles Rams offensive tackle will probably retire to his coming age of 40.

“I’m definitely leaning towards probably being done… I think that’s probably best for me at this point in my career.”

Andrew Whitworth gives @MikeGarafolo and @WillieMcGinest some insight into what’s next 🏆 pic.twitter.com/uPbNN6ZwAo

Following the Super Bowl LVI triumph against the Cincinnati Bengals with 23-20 at So-Fi Stadium on Sunday 13, Andrew Whitworth who has capped his 16th NFL season is leaning towards retiring.

In an interview on NFL’s Total Access, the Walter Payton NFL Man of the Year stated that he is “definitely leaning towards probably being done.” Being 40, the oldest in the NFL, he was previously discouraged because of his age.

“Five years ago, I was told I was a little too old…… Bet on yourself, because five years later I’m holding this trophy up and I’m 40 years old,” said Whitworth on LA’s winning parade.

After the visible emotional victorious game, it is probably something that Whitworth has thought about retiring.

“I think that that’s probably best for me at this time in my career. There’s obviously days I’m waking up right now that I don’t know I want to do that,” Whitworth said of retiring.

Remembering that he has not been able to stay far from the game, he thought that it is probably time to make up for the time with his family. However, staying away from the game makes him see what he has accomplished.

“Unfortunately, when you have a really long season like we did, you don’t have as much time. But you get as much as you can away from it and see where you’re at.”

Growing up in a Christian home, family is probably one of the other considerations besides age.

“Obviously, the family’s involved. Me making sure that my commitment level to being the kind of player that I expect myself to be each and every Sunday is a part of that. So, that’s something I’m just gonna give it another couple of weeks and make sure I’m pretty confident what I want to do.”

With Andrew Whitworth’s start during Week 14, he became the oldest player in @NFL history to make a start at LT. His game-worn jersey is now on display in Canton.@RamsNFL | #RamsHouse

“I’ll come to a conclusion here soon, give the Rams a chance to make the moves they need to, one way or another. But man, what an awesome ride it’s been,” the Second-team All-Pro said which makes it even more convincing that he will be retiring.

Whitworth has not made any official decision yet. If he does say goodbye, teammates and fans would certainly miss him, including Head Coach Sean McVay who was once rumored to be retiring as well.

“I can’t say enough about what he has meant to me personally as a coach and a person,” McVay said. “I’m so grateful for him. He’s been an instrumental part in everything that is right about the Rams the last five years.”

Obviously, for someone who has spent 15 years of his life close to the turf and 239 NFL games, it will be a tough decision.

“I’ll never forget after we won the game, ‘The Great One’ Wayne Gretzky called me, cause I live out here near him in Sherwood (California),” Whitworth said.

“He was like, ‘Hey Whit, there’s only one thing better than winning one, and that’s winning two.’ And I said, ‘You know what, I can’t argue with you.’ It’s gonna be tough. One way or another it’s gonna be a tough decision.” NFL player can earn off the court.

Andrew James Whitworth is an American football tackle for the Los Angeles Rams of the National Football League . He played college football at LSU, (wikipedia)